Whenever I meet new people and they ask what I do for work I always get the “You do WHAT?” reaction. I get it. Have you ever heard a kid say they want to be a puzzle cutter when they grow up? Me either. I didn’t even know I wanted to be a puzzle cutter until that first time I sat at the saw. It’s so cool!
My point is that even though we’re a small company with an unusual product, word gets around. You all know that I believe there’s some special magic that goes around the puzzle world. The way it brings people together is uncanny. Time and again, we see it happening and it’s great! Puzzlers are a special group and you should all be loud and proud about being a part of this crazy congregation.
Proof’s in the Pudding Two of today’s occurrences reflect my point beautifully. I stopped in Norwich on my way to work this morning and picked up the mail. It’s usually Steve’s job but he and Martha are in Boise so it’s my burden for a bit. It’s not hard- in fact, it’s a nice post office and everyone is very pleasant- but for some reason it’s not something I especially enjoy. Every time they go away I appreciate Steve’s efforts more and more. Anyway, in today’s mail was a letter to Steve from a fifth grader named Tahjinae in Wichita, Kansas. Wichita, Kansas?? We only have 5 customers from Kansas and none of them live in Wichita! How the heck did this kid find out about Steve and Stave Puzzles? I know it’s probably the internet but what did they type in the search box that brought us up?! The letter says the class is doing a project on colleges and careers and they’re hoping to find out how best to prepare now, as fifth graders, for work once they graduate from high school. The letter had some interesting questions: 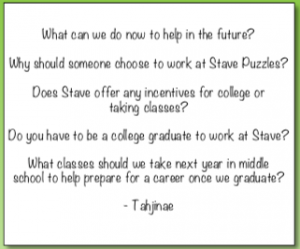 I don’t think Steve will be back in time to respond so I’m going to. It’s pretty neat that Steve and Stave are the chosen topic and it’s important to keep the puzzle magic flowing! The other incident that happened today was an email from a second grader named Clavey in CA. He’s writing a report on inventors and because he loves puzzles, he researched how jigsaw puzzles were invented. Well, guess who’s name popped up? Yep, Stave and the Chief Tormentor himself! The boy decided to pick Steve as his inventor of choice because “he didn’t just invent one thing, he invents new things all the time.” 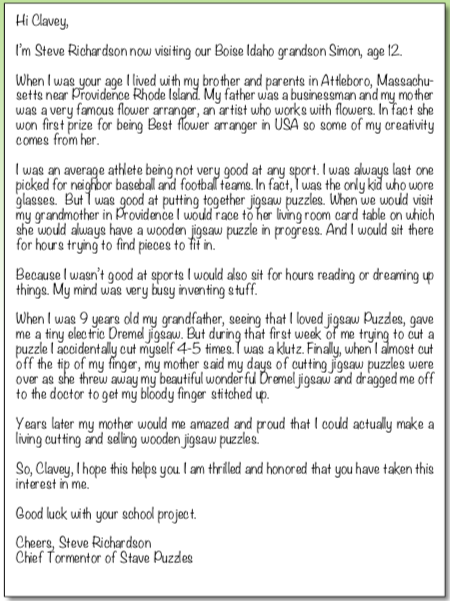 Clavey has done his research. He read the news stories and watched all of the news stories but he needs to know a little bit about where Steve grew up and his life when he was a kid. He’ll be presenting his report in two or three days so we asked Steve to step away from the driving range to do a quick email exchange with him. Two kids reaching out to us on the same day. Whodathunkit? It’s special. Puzzles are special. And you’re special! Keep that puzzle magic moving around the universe! Jennifer
Compare up to 3 items
Compare